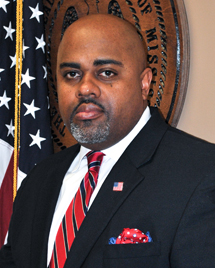 District Attorney | dewayne@msdeltada.com
W. Dewayne Richardson is the District Attorney for the Fourth Circuit Court District of Mississippi.  He was born and raised in the Mississippi Delta in Indianola, Mississippi by two lifelong educators and community leaders John and Annie Richardson.  He holds a bachelors degree in Political Science from Tougaloo College and a Juris Doctorate degree from Mississippi College School of Law both in Jackson, MS. As Richardson’s track record attests, he has always believed in the administration of justice, seeking strict punishments for those who violate the law.  Richardson’s office continuously supports the rights of Victims in the Fourth District and the entire State of Mississippi. Dewayne Richardson joined the District Attorney’s office in 2003 as an Assistant District Attorney for the Fourth District. Dewayne immediately jumped into the prosecution of crimes ranging from drug offenses to capital murder.  In 2005 Richardson began and has represented law enforcement agencies in the seizing and collection of property and currency that were the products of illegal drug trafficking.

Since joining the office he has prosecuted thousands of cases including trying many of those to verdict.  Of the thousands prosecuted, Dewayne has been responsible for prosecuting hundreds of homicide cases including crimes of manslaughter, murder, and capital murder.  A couple of the more memorable cases include State vs. King Young Brown, Jr. and State vs. Benjamin Roberson.  The Brown case was one where the then 15 year-old Brown was convicted of attempting to rape and in the process killing his 6 year-old victim to whom was also his neighbor.  The victim’s body was found days after her family reported her missing wrapped in trash bags in Brown’s family garbage can.  Brown is serving a 50-year sentence.  The Roberson trial stemmed from the report of a 15 year-old girl of her violent rape by a veteran of the local police department.  In that trial the details were brought to light how Roberson detained the victim for truancy violations but instead of booking her into jail violently raped her on the hood of his patrol unit in the freezing rain.  Roberson received the maximum sentence upon his conviction.

Dewayne is a lifelong member of St. Benedict the Moor Catholic Church in Indianola, Mississippi.  He is married to Dr. Lakeisha Richardson and together they have three beautiful children: one son Damion, and two daughters Alexis and Kennedy.