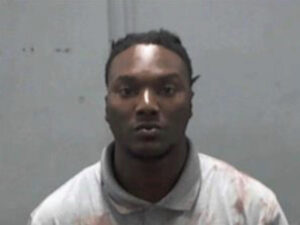 During the early Monday evening of September 16, 2019, officers of the Greenville Police Department were preparing to leave the Delta Regional Medical Center following a call for assistance when they observed a cargo truck drive into the parking lot at a high rate of speed before coming to an abrupt stop. The driver of the truck was identified as Wright. Officers on scene observed the lifeless body of Tymoneshia Parson in the passenger area of the truck and rushed to carry her inside of the ER along with medical personnel. They then attempted to make contact with Wright to obtain any information they could but he became irate, confrontational, and violent—striking the window of the truck with a closed fist, shattering the glass.

Investigators arrived on scene and were advised that Tymoneshia had succumbed to her injuries. A criminal investigation ensued lead by Detective Jeffrey Scott. The investigation revealed that Tymoneshia had been at a local store shortly before being brought to the hospital. Investigators located witnesses present at the store who informed them that Tymoneshia had indeed been present. She had come to the store earlier that day to inquire about employment. She filled out an application and volunteered to come back that same afternoon for training. Toward the end of the two-hour training when Tymoneshia was preparing to leave, those present saw a cargo truck drive speedily past the store before reversing back toward the store then slamming on the breaks. The video showed Wright exit the vehicle and enter the store where he immediately confronted Tymoneshia. The trial jury observed his aggressive hand gestures and movements toward her, with Tymoneshia shrinking back at each one. Trial testimony from present witnesses recounted that, despite her and their attempts to tell him she had been at the store for training, Wright remained loud and confrontational. And although Tymoneshia never reciprocated his tone or behavior, they were asked to exit the store.

The video showed the defendant push Tymoneshia out of the store then, once they were both outside, strike her in the back of the head with a closed fist. As her knees buckled from the blow, she bent down and covered the back of her head with both hands in anticipation of the assault continuing. The defendant then gripped her neck with both of his hands and pulled her around the truck to the passenger side door. Witnesses at the store relayed to law enforcement how he slammed her head against the truck and dragged her toward the door before going back around to open the passenger door from the inside. The jury heard testimony that after he opened the passenger door, Tymoneshia stood there crying and looking around before he demanded sternly through gritted teeth that she get in the truck. She got in and he drove from the store.

Additional officers were advised of a possible additional crime scene on Broadway. They traveled to the location where they found two shoes and a puddle of blood—all belonging to Tymoneshia. The Forensic Pathologist ruled her death a homicide and testified that she sustained numerous blunt force traumatic injuries all over her body from head to toe including severe abrasions consistent with road rash caused by falling from or being drug by a moving vehicle and multiple crushing injuries along with fractures of the collar bone, a rib, pelvis, and multiple fractures of her jaw. The autopsy also revealed injuries to her neck consistent with strangulation.

The defendant was brought to the station the following day for questioning. He claimed that Tymoneshia had jumped from the truck because he was yelling at her during an ordinary couple’s argument and that after she jumped, he felt the rear tires of the truck roll over her body; the pathologist testified that he could not confirm that the crushing injury did in fact result from just being driven over and that, based on the injuries, he could not rule out that she was hit by the truck, drug, then run over. The detectives questioned the truthfulness of his claims because he had also claimed that he was calm when talking to her at the store, that he did not assault her, and that he had never threatened her. Even after confronting him with video evidence of the assault and text messages recovered from his phone where he had previously threatened to kill her, the defendant still refused to acknowledge his actions. He was charged for the homicide and indicted for Capital Murder. Mississippi law deems the killing of another during the commission of Kidnapping as Capital Murder.

Assistant District Attorneys Kaylon McCou and John Herzog, Jr. prosecuted the case. During closing arguments, they detailed to the jury how the defendant’s actions at the store constituted a kidnapping because he used violence to force Tymoneshia into the truck and that, regardless of how she ended up out of the truck or how and when the truck hit her, she was killed by the defendant.

Following the third day of trial, the verdict of the jury was announced in open court midway through the 6 o’ clock hour after approximately two hours of deliberation—Wright was convicted of Capital Murder. Capital Murder convictions carry a mandatory sentence of Life Imprisonment without the possibility of parole unless the State seeks the Death Penalty.

ADAs McCou and Herzog, Jr. are proud to have advocated on behalf of Tymoneshia, her family, and the people of Washington County. “All relationships have their ebbs and flows; but there is absolutely no excuse for resorting to violence or being so consumed with anger that you violently assault, kidnap, and kill another human being. Those who commit these crimes in Washington County or anywhere in the Fourth District will be held accountable and brought to justice,” McCou added.

The Office of the District Attorney extends its gratitude for the work of the Criminal Investigation Division of the Greenville Police Department, the Forensic Pathologists at the Mississippi Medical Examiner’s Office, and for the patience and cooperation of Tymoneshia Parson’s family. “We know this conviction will not result in everyone’s true wish—to bring Tymoneshia back—but we do hope that it provides some sense peace, closure, and healing to her family, friends, and those who truly loved her,” said Richardson.

Greenville, MS – District Attorney W. Dewayne Richardson announced this week that Curley Faulkner pled guilty on October 31st, 2022, in Washington County Circuit Court, to one count of Auto Burglary, and two counts of Possession of a Firearm by […]... read more

Greenville, MS- George Fults was sentenced to a total of fifteen years with the Mississippi Department of Corrections for multiple felony offenses during Judge Ashley Hines trial week for a series of crimes that he committed in the fall of […]... read more